November is here, What happened to October? 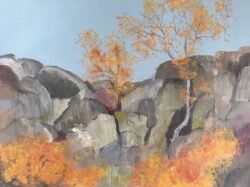 Whenever I start to wonder where and how the time disappears, a song plays in my head, "Who Knows where the time Goes?" by Fairport Convention, not any of the later cover versions, the very wistful, original version, sung by Sandy Denny, who died in 1978 at the age of 31, just a few short years after the song was written. The point of this being, that time disappeared in October! They say time flies wen you are having fun, so I guess that must be it! I have been having fun. Some of the time anyway.

This months picture is of a painting on paper. It is large, A1 size. So large, I am not sure what to do with it. In fact I asked a gallery owner today what she thought I should do with it, bearing in mind that she hasn't seen it, she said "burn it"! Well that was a bit mean I thought, but she went on to explain that being on paper it would need to be under glass, and being so large that would make it very heavy. I felt, at the time, like painting something large, and that paper would be better than a canvas because of the expense. I can see her point, I am looking upon this as a practice piece, and I may well burn it, because I sure as hell haven't got any where to put it! So if you would like a large painting of a bunch of rocks on paper, contact me before it is reduced to a pile of ash.

Actually, I disagree with her on one point, it does not have to be under glass. It could be glued to a panel and coated with gloss medium.

Now the good news, the aforementioned gallery owner has agreed to take some of my paintings, specifically those related to the Peak District, the Gallery being in Derbyshire. I also received some advice about framing. Black float frames it appears are out. I need to "adjust" some of my frames before I take them back to the gallery.
Arsenal Stadium Prints
Season of mist and mellow fruitfulness
Next
Previous